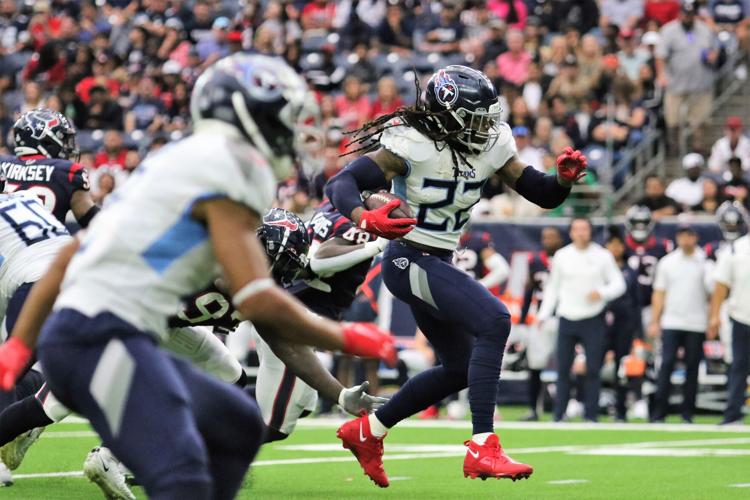 Tennessee Titans running back Derek Henry (22) blows past Houston Texans defenders while racking up some of his 219 yards during Sunday’s game at NRG Stadium. The Titans won 17-10. 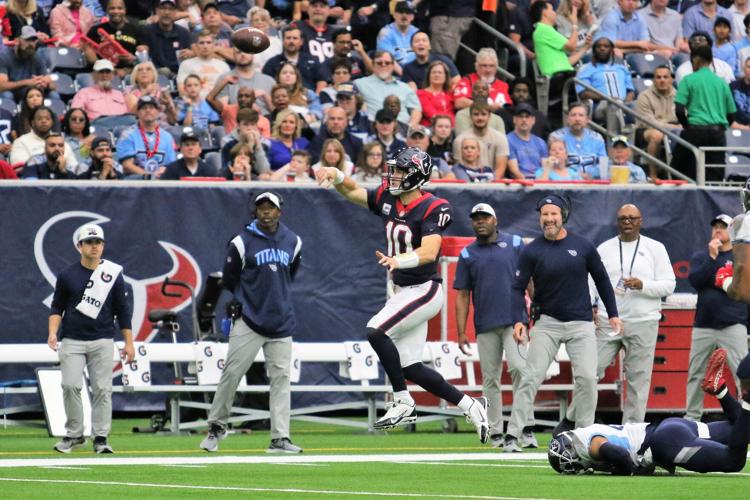 Houston Texans quarterback Davis Mills leaps as he passes the ball during Sunday’s 17-10 loss to the Tennessee Titans at NGR Stadium. 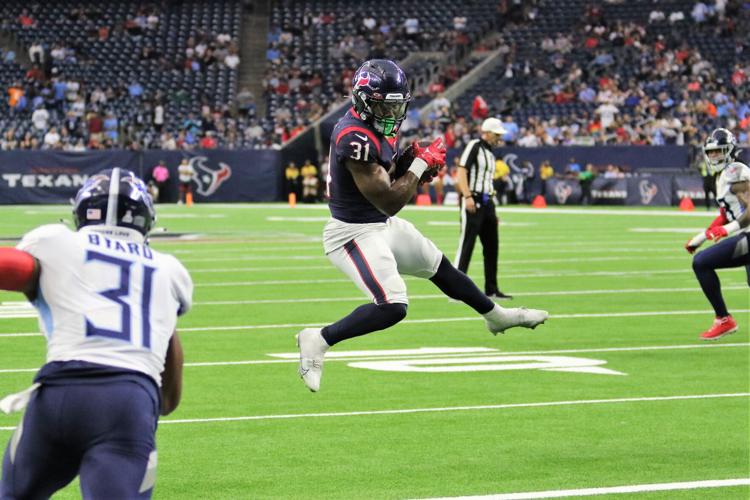 Tennessee Titans running back Derek Henry (22) blows past Houston Texans defenders while racking up some of his 219 yards during Sunday’s game at NRG Stadium. The Titans won 17-10.

Houston Texans quarterback Davis Mills leaps as he passes the ball during Sunday’s 17-10 loss to the Tennessee Titans at NGR Stadium.

The Tennessee Titans beat the Houston Texans 17-10 as the Texans’ defense could not stop the Titans running back duo of Derek Henry, who rushed for 219 yards, and Dontrell Hilliard, who added 83 yards.

The Titans generated 354 yards of total offense while holding the Texans to 161 yards, 90 of which came on the Texans’ last minute touchdown drive.

“The Houston Texans, under my leadership, did not play a good game today,” Texans’ head coach Lovie Smith said. “We haven’t been able to really stop the run all year, and today it definitely showed up. On the other side of the football too, we say we want to run the football. It’s hard to get anything going when you can’t run it. The game plan was to get into favorable third down situations, but when you can’t run the football, you become a one-dimensional team. They play a physical brand of football, and we weren’t ready to play it today.”

In the first half, the Texans had 4 yards passing and 31 yards rushing for 35 total yards. They did take a 3-0 lead when Steven Nelson intercepted a Malik Willis and returned it to the Titans 11 yard line. The Texans could not move the ball and Ka’imi Fairbairn kicked a 43-yard field goal. With 5:09 to go in the second quarter, the Titans benefited from a short punt and took over on the Texans’ 37 yard line. Three plays later, Henry ran 29 yards for a touchdown, giving the Titans a 7-3 halftime lead. Henry rushed for 124 yards in the first half.

Tennessee extended its 7-3 halftime lead to 14-3 when Henry scored on a 1-yard touchdown run. Hilliard carried for 51 yards on that drive. Randy Bullock added a 29-yard field goal with 11:08 to go in the game to make the score 17-3. The Texans drove 90 yards in the last minute and the Dameon Pierce 3-yard touchdown pass from Davis Mills made the final score 17-10.

Due to injuries, the Texans started eight rookies, the largest number in franchise history.

For the game, Mills completed 17 of 29 passes for 152 yards. He had one touchdown pass, one interception, and was sacked three times for 34 yards. Dameon Pierce rushed 15 times for 35 yards and Brandin Crooks had four receptions for 73 yards.

“We need to watch the film, then flush it, make the corrections and move on to next week. A lot of us already know what we need to correct, so we need to move on and make a jump start on the next game. Not much worked for us today. We go to Tennessee later in the season and we will be ready for that,” Mills said.

For the Titans, Malik Willis completed 6 of 10 passes for 55 yards and had one interception. Derek Henry rushed 32 times for 219 yards and two touchdowns, and Dontrell Hilliard had eight carries for 83 yards.

The loss gives the Texans a 1-5-1 record while Tennessee improves to 5-2. Next week, the Texans play Philadelphia (7-0) at NRG Stadium on Thursday night.