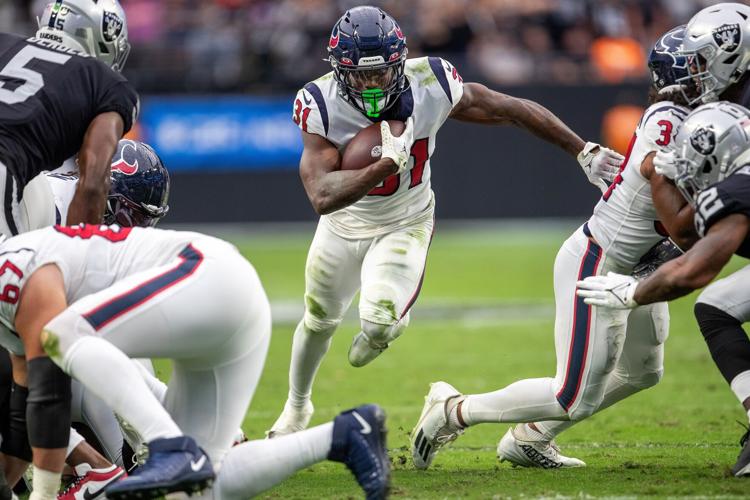 Houston Texans running back Dameon Peace runs through an opening in the line during their game Sunday against the Las Vegas Raiders. 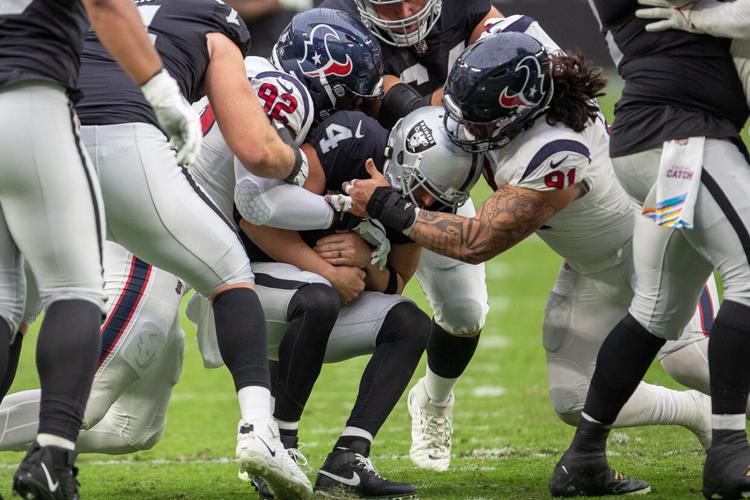 Houston Texans running back Dameon Peace runs through an opening in the line during their game Sunday against the Las Vegas Raiders.

The Las Vegas Raiders scored touchdowns on their last five possessions of the game to beat the Houston Texans 38-20 last Sunday in Las Vegas.

The Raiders improved their record to 2-4, while the Texans dropped to 1-4-1.

In the fourth quarter, Jacobs scored on runs of 7 and 15 yards as the Raiders pulled away. Raider’s safety Duron Harmon put the game out-of-reach with a 73-yard pick six to make the final score 38-20.

“I was trying to make a play on the interception. I just have to be smarter,” Texans’ quarterback Davis Mills said.

“We did a lot of good things, but we didn’t finish the way we needed to. We had to play physical at the end, but we didn’t. The penalties on fourth down and the interception really hurt. We have the desire to win and we have to keep pushing on,” Texans’ Head Coach Lovie Smith said.

For the game, Mills completed 28 of 41 passing attempts for 302 yards and two touchdowns. He had one interception.  Dameon Pierce had 29 carries for 92 yards, and Jordan Akins caught three passes for 68 yards.

“Dameon Peace has really stepped up and the offensive line is playing well. We just need to come together as a team, and go out there and make plays,” Mills said.

For the Raiders, Derek Carr completed 21 of 27 passes for 241 yards and a touchdown. Josh Jacobs carried the ball 20 times for 143 yards and three touchdowns. Davante Adams caught eight passes for 95 yards.

Carr, who attended Fort Bend Clements High School, was pleased with their effort.

“If we can execute like this, we are going to be good going forward. I was really proud of the way we finished. We just want to win football games,” Carr said.

Next week, the Texans play Tennessee at NRG Stadium on Sunday afternoon.