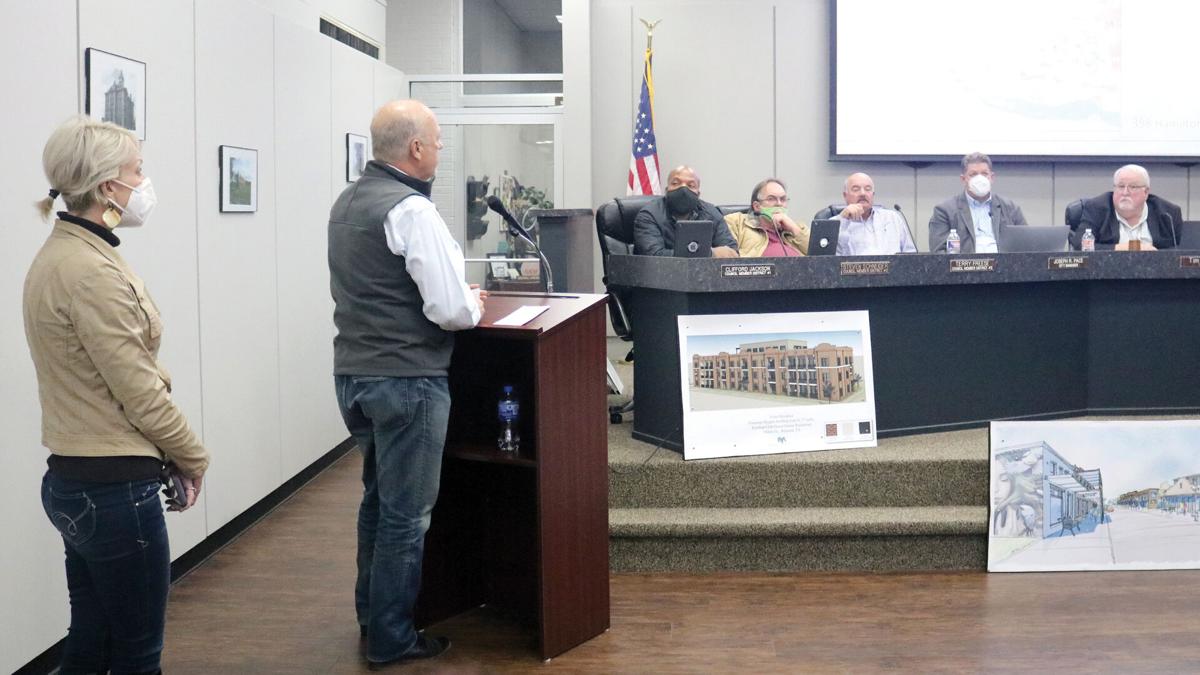 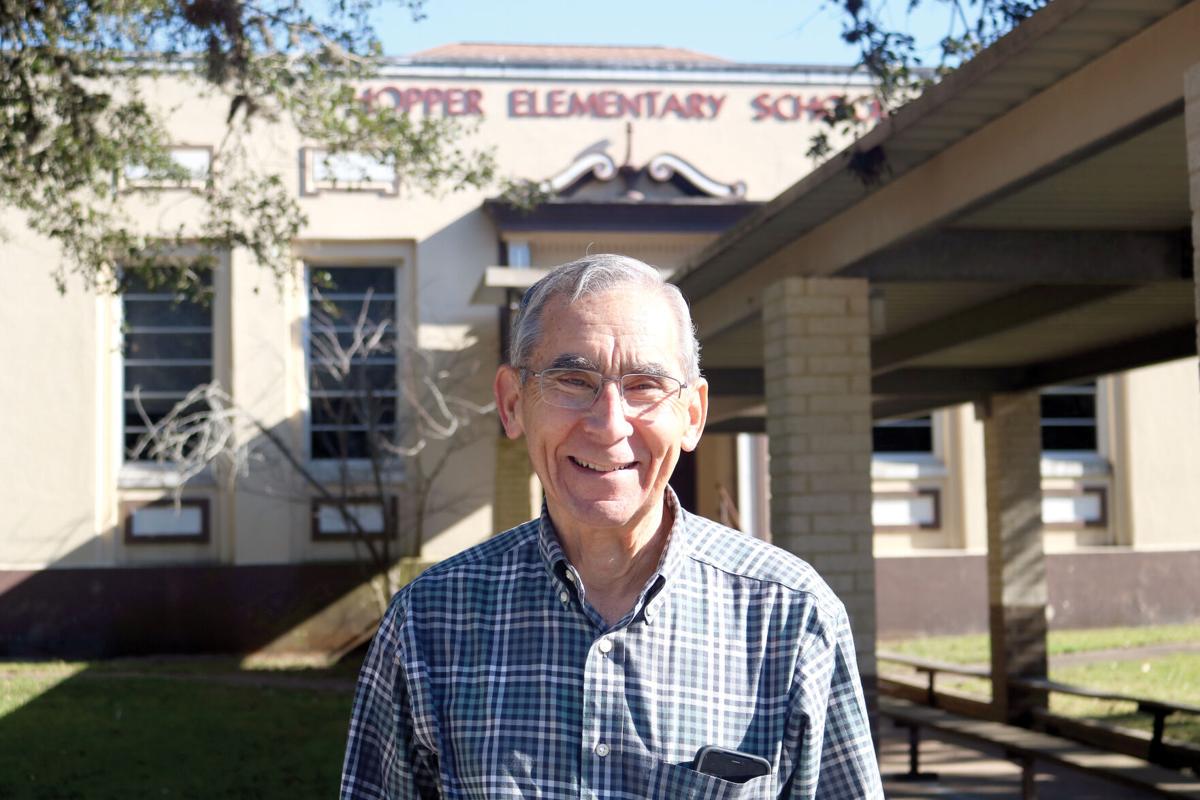 Jeffrey Blair of the Wharton County Heritage Project poses in front of the former Hopper Elementary School. His group is hoping to preserve it as a community resource.

Jeffrey Blair of the Wharton County Heritage Project poses in front of the former Hopper Elementary School. His group is hoping to preserve it as a community resource.

The two sides of the same coin made presentations Monday night at the Wharton City Council meeting on how best to preserve the historic Hopper Elementary School on Abell Street.

On one side is developer David Bowlin, who has a contract to buy the property from the Wharton Independent School District, and on the other are members of the Wharton County Heritage Project (WCHP). Both want to see the school preserved, but they contrast sharply on how to do it. Both sides gave the council an earful as they presented their case.

Bowlin wants to turn the school (once called Stephen F. Austin Elementary School) into housing units, converting classrooms into apartments, and building single-family homes on the playground. The WCHP wants to see the building preserved and utilized for educational and community purposes. Both sides have cooperated to get the building listed on the National Register of Historic Places.

At risk is a $8.75 million HUD grant for housing in the city.

“I’m happy to report that funding has been provided by the state in the amount of $8.75 million for this project,” Bowlin said. “It will fund housing – the number of units has yet to be determined, it may be as small as 14-15, it may be more, depends on what future studies determine whether or not units can be developed on playgrounds.”

Bowlin explained that the HUD grant is funneled through the Texas General Land Office (GLO) as part of Hurricane Harvey recovery efforts. He said the application for the grant was site-specific. Members of the WCHP disagree.

“I read the grant application, and there wasn’t one single element of that application that was based on actual reality of the site in the building,” added historian Merle Hudgins.

Blair said that despite rumors, the WCHP does not want to see the city lose the grant and the housing it would bring. He said there should be no problem moving the site of the grant.

“We are not against Mr. Bolin’s 34-unit housing project, which is an $8.75 million grant,” he said. “People have said that we’re trying to kill the housing grant, and that is absolutely incorrect. We’re just trying to relocate the housing grant. Wharton County Heritage Partnership is a strong proponent of affordable housing in our community, supports educational excellence while preserving the historic footprint of the Stephen F. Austin school and all the significant stories that it contains.”

Laura Clemons, who is assisting Bowlin, said she was excited about his historic preservation plans as well as his desire to bring affordable housing to Wharton.

“I feel like it is such a blessing for David to have stepped forward and taken over this project, because he probably has more experience than just about anyone in the state of Texas, of preserving buildings and working on teams to do things like the Alamo,” she said.

“So, when it comes to the interior of the space, I personally was the most excited to see how tall the ceiling heights are once I squirreled up into the attics. So there’s a lot of drop ceilings like we have in a lot of these buildings. But it looks like there’s 25 (foot)-plus ceiling heights in these individual classrooms, which is going to make for some really spectacular loft-style units that are going to have, you know, nine-foot windows inside the units. The corridors are going to be restored to this beautiful breezeway inside.”

She said the building would continue to have an educational aspect to it.

“The most exciting part to me, though, is the children’s literacy lounge. In working with the superintendent and a number of educators, and being a former school teacher, I know how important it is that we get the schools doing better. I feel like that’s something we can all agree on, is that literacy is very important to us,” she said.

She described the literacy lounge, proposed for the old cafeteria, as a “place that kids can come and hang out, open to the public, sort of like a cafe for kids with a juice bar and healthy food where they have all types of literature.”

One of the historic educational aspects of the school was its role in integration. It was a Little School of the 400, which was a program in Texas to teach Spanish-speaking children 400 English words before they entered kindergarten. Blair said it was the first school in Wharton to be integrated during the civil rights movement in the 1960s.

“We’re working to integrate the 400 words that were required to be learned,” Clemons said. “The indigenous and First Nation people, we have some literature that we’re working with them to have included in the library. The African American history is also, we’re working with folks to represent history throughout the building of all of the different cultures that have made the history of the building in the past. Our motto is ‘Come live a part of history.’”

Blair said he doesn’t think that will be enough to meet the educational needs of the community.

“The partnership team has presented viable alternatives for the proposed housing on the school grounds. Wharton desperately needs supplemental public education services to address the growing needs of its diverse community,” he said.

When asked by the city council what the WCHP would do with the site, Blair said they would partner with the Wharton ISD to provide programming there. He said he envisions a place like the Northside Center in El Campo. He said the school district, Wharton Junior College, and other nonprofit entities in town could make use of the space for classes and community programs.

In addition to converting the school into housing, Bowlin is proposing building single-family homes on the playground that would sell at market value. Because 51% of the project falls into affordable housing, it qualifies for the grant.

Bowlin explained that it is true that the grant could be moved, but the money would be lost. He said his was one of 82 grants awarded by the GLO and that there are many other communities vying to get the money if Wharton loses it. He said moving the site changes the scoring for the grant. While Wharton would still qualify, it would drop to the bottom of the list, and there is no more funding for any project below the 82 already funded.

“The City of Wharton will not get funding for that project if it goes to another site,” he said. “That’s what I’ve been told by the General Land Office. I can assure you that Commissioner (George P.) Bush is personally aware of this.

Mayor Tim Barker said the grant is important to the city.

Blair asked that the council write a letter to the GLO endorsing moving the grant project. In the end, after listening to several speakers, the council took no action.