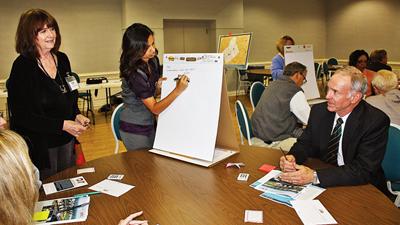 A facilitator uses a display board to write down suggestions made by community members during a small group discussion. A regional planning session was held last week at the Wharton Civic Center. 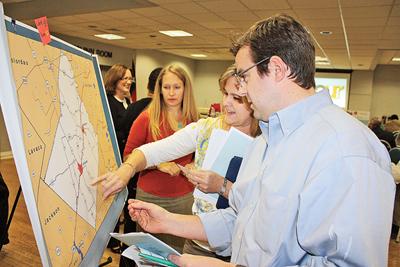 Participants in the planning session use green and yellow stickers to indicate where they work and where they live in Wharton or surrounding areas.

A facilitator uses a display board to write down suggestions made by community members during a small group discussion. A regional planning session was held last week at the Wharton Civic Center.

Participants in the planning session use green and yellow stickers to indicate where they work and where they live in Wharton or surrounding areas.

With 4 million new residents expected in the Houston-Galveston region in the next 30 years, officials want to know what the current residents think of how to handle the growth.

The Houston-Galveston Area Council held a public meeting last Thursday at the Wharton Civic Center, and about 30 interested residents took part in the interactive meeting.

“We are dying to hear what you have to say about your county,” said Pat Waskowiak, one of the facilitators.

Precinct 1 Commissioner Leroy Dettling welcomed the council’s facilitators, who brought maps and charts and asked everyone to place stickers on a map indicating where they worked and where they lived.

“That’s double the population of Houston and Harris County alone,” Dettling said of the projected 4 million new residents. “A lot of those residents will be coming to Wharton County. We need to be prepared now.”

Wharton was one of many meetings being planned in the 13-county region. Waskowiak said the plan would be developed over the next two years.

While the group had a basic list of planning ideas for the group to consider, they are also looking for more ideas.

“You are the ones who will be developing this plan,” Waskowiak said. “Your input is critical.”

Waskowiak said Wharton County could add about 6,000 new residents by 2035.

“It may not sound like much, but compared to the current population, that’s a pretty significant increase,” Waskowsiak said. “It’s an opportunity to shape change instead of just letting it happen.”

Another facilitator, Ellen Heath, went over a list of draft goals, and participants used “clickers” that allowed them to answer questions with the results immediately being displayed during the presentation.

The draft goals were divided into three overlapping areas — people, places and prosperity.

After the goals were discussed, each table was joined by a facilitator and they went into more detail of their goals, which were written on display sheets.

“This is the very begnning of the project,” Heath said.

Participants were also asked to fill out a survey. Those who didn’t attend the meeting can fill out the survey online at www.ourregion.org.

Heath said additional meetings will be planned in Wharton and other areas. They plan to come back in the fall and look at developing the ideas that were brought up at this month’s meeting.

She also said they are looking for people to join their community ambassador teams.

The project shoud be completed by February 2014.